"Dinah Lance would be a key member of the Justice League based on her martial arts skills alone, but this bird of prey packs an extra surprise. Using her unique Canary Cry, she can scream, shout or even sing to create ultrasonic vibrations so powerful that they can shatter metal or stone. By directing her cry downwards, Black Canary™ can even use her mighty voice to fly!" -LEGO.com

Black Canary has Elsa Schneider's hairpiece in cool yellow and she wears red lipstick. Her torso and arms are blue and the former is designed to look as a jacket over a black leotard with some flesh showing near the top and has a silver belt above her waist. She has black hips and her legs are light blue with black fish nets and boots.

In LEGO Batman 2: DC Super Heroes, Black Canary is able to use her canary cry which can break light blue LEGO objects, stun several enemies at once, and a concentrated scream can defeat an enemy or destroy objects. Her powers and abilities are the same in LEGO Batman 3: Beyond Gotham.

Dinah Laurel Lance is a second generation superhero. Her mother, Dinah Drake, was the original Black Canary who was retired, and her father was a detective. Despite her mother's wishes, Dinah became a superhero herself, taking the name Black Canary. Unlike her mother though, Dinah is able to produce a high-pitched wail, called the canary cry, to fight enemies.

Black Canary often works in Gotham City with Huntress under the guidance of Batgirl as a main agent of the Birds of Prey, a team of female superheroes which has also included Catwoman, Wonder Woman, Katana, and even Poison Ivy.

Black Canary has shown attraction to Batman, but married another superhero known as Green Arrow.

In LEGO Batman 2: DC Super Heroes, Black Canary plays no role but is an unlockable character. In the console version of the game she is unlocked after players collected 150 gold bricks. She can be found on a rooftop in the south of Metro Station (North Island) area of Gotham City and costs 500,000 studs.

In the portable version of the game, she is unlocked for purchase by finding the last minikit of the sixth level, Juggernaut Chase. She costs 100,000 studs.

Black Canary is an unlockable character in LEGO Batman 3: Beyond Gotham. After completing a quest from Aquaman on the Watchtower, the Black Canary character token is awarded, and can be made playable by purchasing her for 20,000 studs. She also appears in the third post-credits scene.

The Sara Lance version from the TV show Arrow appears as a downloadable character. However, that variant is seperate and goes by Canary.

Black Canary made a cameo appearance as one of the guests in attendance for the 75th Annual Justice League Anniversary Party that was held at Superman's Fortress of Solitude.

The Dinah Drake version from the Rebirth comics appears as an unlockable that costs 15,000 studs after finding file #20 in Gotham City. 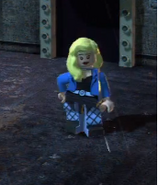 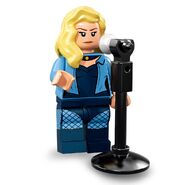 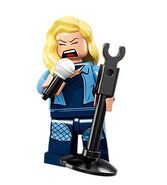