Brickipedia
Register
Don't have an account?
Sign In
Advertisement
in: Class 4 articles, Pages needing citation, Minifigures introduced in 1984,
and 4 more

Like all other Classic Spacemen, the Black Classic Spaceman has the 001 smiley head and wears a simple spacesuit with a helmet and airtanks, featuring the Classic Space logo printed on the torso. His spacesuit is entirely black.

The 2009 and 2012 reissues of the Black Classic Spaceman for the Vintage Minifigure Collections replace the original helmet with the modern Mini Crash Helmet. The 2009 version has the Classic Space logo printed lower on the torso than the original minifigure, but this is rectified in the 2012 reissue.

Commander Black has brown Mini Wig Man hair when seen without his helmet.[4]

Commander Black is the main character of the LEGOLAND Space comic advertisements released between 1985 and 1986. In SOS rymd-station Alpha 1, Commander Black receives a SOS from the Alpha 1 space station, whose stabilizer has malfunctioned. He flies the Gamma-V Laser Craft to Alpha 1 and gives them directions to fix the stabilizer, preventing the station's destruction.[4] In Forsknings-resa i det okända, Commander Black notices that the Cosmic Fleet Voyager's cooling system had an error, apparently caused by Roger Robot going into the computer, and he threatens to scrap Roger if this happens again. Commander Black and his crew take a photo before they depart into the unknown.[6] In The mysterious Planet, they follow a signal, but the Cosmic Fleet Voyager spirals out of control. As punishment, Commander Black forces Roger to clean the newly-constructed planet station once they land on the mysterious planet.[2] In En planet full av över-raskningar, Commander Black and his fellow spacemen explore the planet but cannot find anything until Roger Robot discovers that the planet is hollow and inhabited on the inside.[7] In Möte i rymden, Commander Black and Yellow set out to explore the other half of the planet in the Sonar Transmitting Cruiser.[8]

Commander Black continues to appear in the 1987 comic advertisements for Futuron. In Rogers äventyr i framtiden, Commander Black and Roger Robot emerge from the "time tunnel" and discover the Monorail Transport System, where they ride a monorail to the center of the Transport System.[9] In Försvunna i rymden?, Commander Black and Roger Robot meet Major White, and Black introduces himself as from Terra, the astronauts' name for Earth. Major White gives them a tour of the Transport System and lets them ride the Stardefender "200", but Roger pushes a button that causes the Stardefender to split into three smaller spacecrafts.[10]

In LEGO Legacy: Heroes Unboxed, Spaceman Jens is an Explorer support hero with the abilities "GAARD Dog", "Solar Flare", "Blast Off!", "Tech Support", and "CTRL+Assault+DEL". He will be unlocked through Guild raids. Jens is characterized as a techie who built the GAARD Dog robot to be his friend. 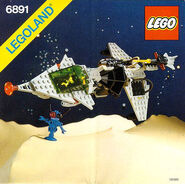