Brickipedia
Register
Don't have an account?
Sign In
Advertisement
in: Class 4 articles, Minifigures introduced in 1996, Racers minifigures,
and 2 more

Black Jack Hawkins,[1][2] alternately known as Blackjack Hawkins,[3] is a Pirates minifigure introduced in 1996. He physically appears in eight sets (including rereleases and alternate set numbers), as well as in two Video Games.

Black Jack Hawkins' appearance varies between sets, but he is consistently depicted wearing a tricorne (usually black, but sometimes earth orange) and a bright blue jacket over a brown button-down shirt. He usually wears grey pants, but has also been shown with black or dark green pants, and even with a peg leg in 6248 Volcano Island. His face, shared with Colonel Colt Carson, gives him a dark grey beard.

Black Jack Hawkins is a member of Captain Redbeard's crew aboard the Red Beard Runner as they battle against the Imperial Armada.

In LEGO Chess, Black Jack Hawkins only appears during the FMV cutscenes. In the intro cinematic, Black Jack and a conquistador help assemble the chess set's King piece. During the battle between the Red Beard Runner and the Armada Flagship, Black Jack is seen standing alongside Captain Redbeard and Gonzo Goldbar on the Red Beard Runner's deck. If the player loses the following chess game, then Black Jack watches from the ship's rigging as Admiral Woodhouse is forced to walk the plank. In the ending cinematic, Black Jack is among the Pirates and Western characters applauding the player.

In LEGO Racers, Blackjack Hawkins appears as an opposing CPU racer in the Circuit 3 and Circuit 6, as the representative of Pirate Skull Pass. His minifigure parts are unlocked by beating Captain Redbeard in Circuit 1.

In LEGO Battles, Black Jack Hawkins makes a cameo appearance in the Pirates Act 1 cutscene. In a flashback sequence, Black Jack, George, and a third unnamed pirate bury a massive bounty of gold underneath the current location of Governor Broadside's fortress. Once their work is done, Black Jack and George turn on the third pirate and fight over possession of the treasure map, accidentally tearing it into three pieces as a result. 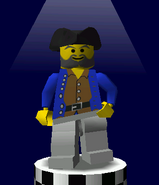 Blackjack Hawkins as he appears in LEGO Racers

Black Jack Hawkins as he appears in LEGO Battles