Blackbeard carries a sword called The Sword of Triton. He is based on Blackbeard from the fourth Pirates of the Caribbean movie, with black legs with printing and a black body with printing. The yellow ends of his beard are burn marks.

Blackbeard is an evil voodoo wizard seeking out the Fountain of Youth to undo a prophecy of death foretold by the Quartermaster. He has a daughter named Angelica. During the journey, Blackbeard sends Scrum, Philip, and other crew members to act as bait on Whitecap Bay to catch a mermaid, as Jack Sparrow, Angelica and others fix a light to shine on them. Eventually, They catch the mermaid who is later named Syrena. Later on, Blackbeard Pretends to kill Philip in order to extract a tear from the mermaid. Blackbeard eventually makes it to the Fountain of Youth, Then the Spanish, the British, and Privateer Barbossa catch up with him. During a battle, The Spanish destroy the Fountain of Youth, and Blackbeard receives a stab through the chest from Hector Barbossa. Then Angelica cuts herself on Barbossa's poison sword, leaving them both on the edge of death. Jack Sparrow then uses the remaining water from the fountain and the mermaid tear to save them, though only one can live. So Jack Sparrow tricks Blackbeard by giving him the chalice that takes life, saving Angelica's life. Blackbeard then turns into a skeleton, holds out a gaunt hand toward Angelica, then turns to dust and dies. 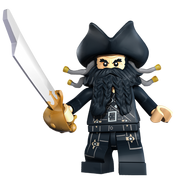 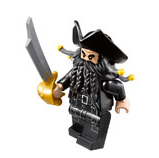 Blackbeard with the Sword of Triton

Blackbeard in LEGO Pirates of the Caribbean: The Video Game

Blackbeard with one of the chalices

Retrieved from "https://brickipedia.fandom.com/wiki/Blackbeard?oldid=1987173"
Community content is available under CC-BY-SA unless otherwise noted.