In 6918 Blacksmith Attack he takes on an almost entirely different appearance, having brown overalls, rather than black, over a grey shirt with grey arms and brown legs, unlike his first appearance with yellow arms and black legs. His beard is more unkempt, too. 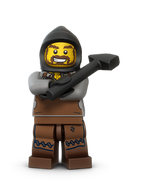 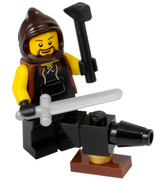 Add a photo to this gallery
Retrieved from "https://brickipedia.fandom.com/wiki/Blacksmith_(Kingdoms)?oldid=1977526"
Community content is available under CC-BY-SA unless otherwise noted.