Brickipedia
Register
Don't have an account?
Sign In
Advertisement
in: Class 3 articles, Blacktron Minifigures, Minifigures introduced in 1991,
and 3 more

In LEGO Legacy: Heroes Unboxed, Blacktron Astronaut Quincy is an Explorer support unit with the abilities "Skill Shot", "Reverse Engineered", "New Tech, New Me", and "Enhanced Optimist". He is characterized as an early adopter who is obsessed with the latest technology and gadgets, including the eBlacktron communication device and Brickspace Navigator.

Blacktron Astronaut Quincy and fellow Blacktron Astronaut Dwayne are the main characters of the Early Adopters brickpace event, which rewards players with Cosmo Caps to spend in the Event Shop. Quincy and Dwayne had pre-ordered the new eBlacktron X at Brick Buy, but their pre-orders were stolen by Princess Storm's underground pre-order racket on behalf of Crown King Brutus. The event's later missions require the player to have unlocked Blacktron Quincy and include him in their party. 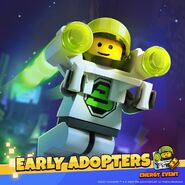 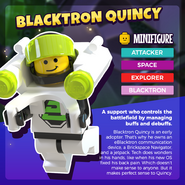 Community content is available under CC-BY-SA unless otherwise noted.
... more about "Blacktron Astronaut Quincy"
RDF feed
Appearances
6812 Grid Trekkor
6878 Sub Orbital Guardian
LEGO Legacy: Heroes Unboxed +
ArticleRating
3 +
Image
sp051.jpg +
InfoboxTemplate
Minifigure +
ShopDescription
A support who controls the battlefield by … A support who controls the battlefield by managing buffs and debuffs. If you got a cough, he's got a gadget for that!Trivia<br/>Blacktron Quincy is an early adopter. That's why he owns an eBlacktron communication device, a Brickspace Navigator, and a jetpack. Tech does wonders in his hands, like when his new OS fixed his back pain. Which doesn't make sense to anyone. But it makes perfect sense to Quincy.1991: A Space Odyssey<br/>Debuted in 1991Space Trekkor<br/>Can be seen riding around in the "Grid Trekkor" rover...Moonwalker<br/>...or walking around in the "Sub Orbital Guardian" walker.ound in the "Sub Orbital Guardian" walker. +
Theme
Space +
Title
Blacktron Astronaut Quincy +
Years
1991 +
Advertisement