Blacktron Future Generation is a faction featured in LEGO's Space theme and was introduced in 1991. It's a visually updated continuation of the original Blacktron line from 1987. It is commonly known as Blacktron II.

In 1991, Blacktron received a makeover with uniforms somewhat ismilar to M-Tron: black with white trim, neon yellow/green canopies and visors, and new chest emblem. It also replaced the creative but haphazard interchangeability of Blacktron with refined and mostly uniform cockpit globes (best seen here), which could be switched unimpeded between those ships. Only three sets of eleven featured them.

Blacktron Future Generation seemed to be mostly a rehash of Blacktron I on a set-by-set basis.

They picked up where Blacktron left off as an outlaw faction of space pirates. In the 1991 catalogue, Blacktron Future Generation is seen attacking M-Tron's 6989 Mega Core Magnetizer. All of the Space Police II sets released in 1992 each have a Blacktron Future Generation astronaut as a prisoner. A 1993 television ad shows the 6981 Aerial Intruder attempting to steal from Ice Planet 2002's 6983 Ice Station Odyssey. 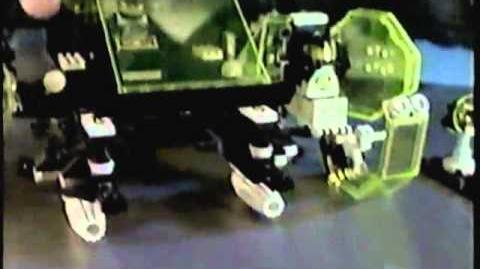