Blade was born as Eric Brooks to a prostitute in London. While giving birth, his mother was attacked by a vampire, who drained her blood and killed her. However, this allowed vampiric enzymes to pass into the bloodstream of the newborn Brooks. In later life Blade would become a vampire hunter, and would cross paths with Dracula himself.

His token in the game. 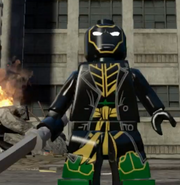