Bladvic is a Legends of Chima minifigure that was released in 2015.

Bladvic was a male bear. He, like the rest of the bears, was always sleeping and when they were not they were very sleepy and unalert. He and all other bears could only be woken up by whispering in their ears. At one point he was seen in the Speedor tournament jousting against Rogon, but was knocked off his speedor and fell asleep on the battlefield.

He fell asleep again during a Market Day speedor tournament, when he is racing with the other competitors. He slowed down his Speedor, fell off of it, and then fell asleep.

Bladvic was one of the bears that found a bee-hive dripping with honey merged with Chi, causing the bears to go on a rampage throughout Chima when they ate it.

During the conflict against the Dark Tribes Bladvic was one of the eight warriors who went on the quest to save the Legend Beasts. After finding out that Lavertus was ShadoWind, he participated in a speedor race in the cave area of the track for he was good at racing with his eyes closed. At one point the scorpions stang Bladvic and order him to destroy his friends, but he fell asleep shortly afterwards and subsequently returned to normal.

During the conflict with the Ice Tribes Bladvic and the other bears had a vision of the Ice Bears reawakening, which angered them a lot. They became more aggressive, angry, and less sleepy, and proceeded to mobilize massive mechs, marching towards the Lion Temple.

Although the Ice Bear Tribe had nearly crushed the defenses of the temple, Bladvic and the other members of the Bear Tribe arrived and turned the tide of the battle, destroying Ice Bear vehicles and troops in a blind fury. He later joined the rest of Chima's heroes by donning the Fire Wing harnesses and performing the Great Illumination, which un-corrupted the Ice Tribes.

Bladvic sleeping against a rock

Bladvic in Season 2 of Legends of Chima: The Animated Series 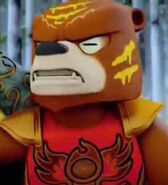 Bladvic was frozen
Add a photo to this gallery