Blue was recreated by InGen to live as an attraction of Masrani Global Corporation's dinosaur park Jurassic World sometime before 2015. Her distinctive blue pattern is known to be made from using Black-Throated African Monitor Lizard DNA. When she was young she and Echo fought for dominance over the park's Velociraptor pack with Blue being the victor. At some point in her life, a human named Owen Grady trained her and the other members in her pack.

Just before the incident or at least any of the major events of the incident occurred Blue attempted to strike a newly hired Jurassic World employee in her pack's paddock after he went to rescue a pig inside the enclosure, but Owen Grady intervened.

Blue and her pack mates assisted their trainer during the rampage of the genetic hybrid Indominus Rex. But during the hunt her and her pack began to communicate strangely. At some point, She and a packmate attacked the mobile veterinarian vehicle MVU-12 where Blue attacked the driver's side of the vehicle, trying to kill Claire Dearing, who was driving the car.

She re-bonds with Owen at the end of the film, in the final fight, and she chooses to fight with him. She was instrumental in defeating the Indominus Rex, as she was the one who attacked it it after it was about to kill the T-Rex. 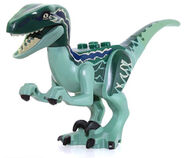 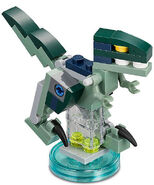 Blue in LEGO Dimensions
Add a photo to this gallery

Retrieved from "https://brickipedia.fandom.com/wiki/Blue_(Velociraptor)?oldid=1929640"
Community content is available under CC-BY-SA unless otherwise noted.