Blue Beetle is a Super Heroes minifigure who appears in LEGO Batman 3: Beyond Gotham and LEGO DC Super-Villains. He also appears in physical form in the summer 2016 set 76054 Batman: Scarecrow Harvest Of Fear.

Blue Beetle has a black head with some blue detailing on it and a confident expression. He uses the Alien Mosquitoid wings in clear and has a new armor piece that fits over it and includes the secondary wings on the back. His torso and legs continue the blue-on-black patterning of his armor, and his legs are dual-molded to include his blue boots.

Jaime Reyes is a teenager with Mexican background. One day he found a robot blue scarab and took it home. That night, the scarab awoke and fused itself to Jaime's spine. Jaime soon discovered that the scarab could transform into a robotic armour with a jetpack, laser cannons, maces, shields, swords, hammers, a wormhole generator, and other gadgets. Now he uses the armour to fight evil as a member of the Teen Titans.

Blue Beetle appears as a main character in the second season of Young Justice, alongside Robin, Kid Flash, Miss Martian, and Superboy. He becomes embroiled in the plot by the involvement of the Reach, the aliens who have given him his powers. Though temporarily enslaved by them, he regains control of his mind in time to fight off their invasion.

Blue Beetle along with Reach Warrior and Captain Cold can be unlocked via free play, in the mission "A Blue Hope". 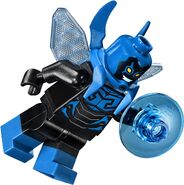 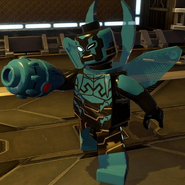 In Batman:The Brave and The Bold he is voiced Will Friedle who also voiced Batman Terry McGinnis) in Batman Beyond,Deadpool in Ultimate Spider-Man and Star-Lord in Guardians of the Galaxy animated series.