Bobbajo is a minifigure from LEGO Star Wars: The Force Awakens released in 2016.

Known as the Crittermonger, the Nu-Cosian Bobbajo was a common sight in Niima Outpost, bent beneath the caged animals he carried on his back. Bobbajo sold some of his animals as food to spacers, while considering others pets. He was a noted storyteller, regaling audiences with adventures he and his menagerie had pursued in long-gone days. 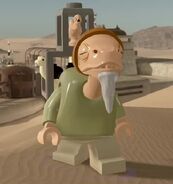