"Well that could've been worse."
―Bofur in The Hobbit: An Unexpected Journey

Bofur is a minifigure from The Hobbit: An Unexpected Journey, released in November 2012.

Bofur is an exception among dwarves from The Hobbit by the fact that his beard is a mere printing on his head and not a separate piece. He has a large moustache, and dark brown braided hair protrudes under the grey and brown hat. Bofur wears a brown cloak, and he has a dark nougat body with a huge belt and a bulging pack printed on it. His hands are the regular flesh tone, indicating the absence of gloves or gauntlets, and his short legs are reddish brown. Bofur's most noticeable accessory is a large fur hat, however he also has a cape and pickaxe.

Bofur was one of the twelve companions of Thorin and Bilbo on their quest to journey to the Lonely Mountain and recover their treasure and the Dwarven Halls beneath the mountain. He is the brother of Bombur and the cousin of Bifur. According to Wikipedia's description, Bofur liked mince pies and cheese at tea, and played the clarinet. 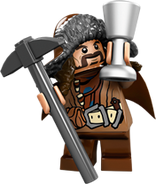 Another CG image
Add a photo to this gallery