Bombur is a minifigure from the The Hobbit: An Unexpected Journey theme, introduced in November of 2012.

Bombur has light grey legs and a brown body with green arms. His torso consists of a brown vest, with outline of his large size. There is also stitching where the neck of the shirt is. The torso also has a green belt at the waist. He has a unique hair/beard/chest piece, which is specially designed to make him look fat. He has a bald patch on the top of his head.

Bombur was one of the twelve Dwarven companions of Thorin Oakenshield. He was the brother of Bofur and the cousin of Bifur. He was known for having an enormous appetite and for being very large. In the book, Thorin is unfortunately at the bottom of the pile of dwarves that are Bifur, Bofur, and Bombur. Thorin is very angry at Bombur for falling on top of the pile and putting all his weight on Thorin's said light blue hood with a silver tassel. Tolkien states directly that Bombur is "immensely fat and heavy", so a sandwich board slips over his LEGO head to make him look bigger than the other dwarves. He has a double-sided head and the shorter legs used on the other dwarves and Bilbo Baggins. His legs are unposeable, thus making him unable to sit properly at the table in set 79003 An Unexpected Gathering.

The top of Bombur's head 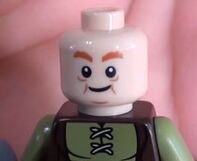 Bombur in LEGO The Hobbit: The Video Game
Add a photo to this gallery