Bootstrap Bill is the twice-cursed father of William Turner Junior. He was a pirate in Jack Sparrow's crew on the Black pearl, but was forced to take part in Hector Barbossa's mutiny. When the crew, under Barbossa's command, took over the treasure of Cortez, he was cursed along with the other crewmates. He later stood up to his mates about the mutiny, but this didn't bode well for him. They strapped him to a cannon and sent him sinking to the depths of the ocean, unable to move, unable to die. Davy Jones managed to later convince Bootstrap to serve in his crew for a hundred years in order to escape his ill fate. In Jones' crew, he began to slowly transform into a cursed crewmate, covered in barnacles, sea creatures and a starfish. He later met his son again, when the young man found himself in the crew. Jones forced Bootstrap to whip his own son, otherwise the Bo'sun would have punished the boy. He helped his son steal the key to the Dead Man's Chest, then gave him his pocket knife and bode him farewell as Will escaped the Flying Dutchman. Will promised to save his father by killing Jones, though Bootstrap didn't believe his son could. Later, he thought his son was killed when the Kraken destroyed the merchant vessel on which Will had stowed away. Bootstrap later merged with the ship, losing much of his memory and his humanity. He met Elizabeth, and assured her that Will was coming for him, but soon had doubts as he slowly regained his memory. He fought Will, not remembering it was his son, during the Battle around Calypso's Maelstrom, but Will used the knife Bootstrap gave her to restrain him. When Davy Jones killed Will, Bootstrap attacked Jones, to no avail. Will, with Elizabeth Swann and Jack Sparrow's help, stabbed Jones' heart, before dying. Bootstrap cut out his son's heart and put it in the chest, making him captain. Bootstrap regained his humanity, and settled his debt to Jones, but chose to remain in servitude to be with his son. 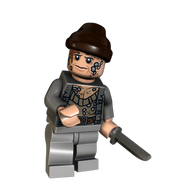 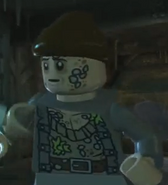 Bootstrap in LEGO Pirates of the Caribbean: The Video Game

Bootstrap about to eat a crab

Retrieved from "https://brickipedia.fandom.com/wiki/Bootstrap_Bill_Turner?oldid=1894089"
Community content is available under CC-BY-SA unless otherwise noted.