"They have a Cave Troll"
―Boromir in The Lord of the Rings: The Fellowship of the Ring

Boromir is a minifigure from The Lord of the Rings theme released in May 2012. He has a blue robe and red cape.

Boromir was part of the Fellowship of the Ring in The Lord of the Rings trilogy. He was the favourite son of Lord Denethor, the Steward of Gondor, and the brother and best friend of Faramir. A strong but deeply flawed Gondorian warrior, who was the second member of the Fellowship to fall. Lured by the power of the One Ring, he attempted to take it from Frodo at Amon Hen. After realizing the Ring was controlling him and coming to his senses, he fought bravely at Amon Hen, protecting the two remaining Hobbits, Merry and Pippin (Frodo and Sam had departed soon before the battle to continue on their own for fear their other friends would also fall to the Ring). Boromir died shortly after Aragorn found him from the wounds inflicted by the arrows of Lurtz, and to avenge Boromir, Aragorn decapitated Lurtz. 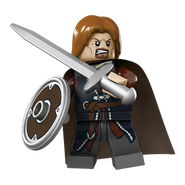 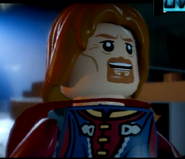 With Merry an Pippin. 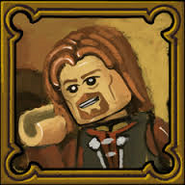 Boromir in the "One Does Not Simply..." achievement 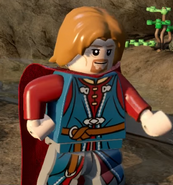 In LEGO Dimensions
Add a photo to this gallery