The 2010 Bossk is coloured sand green. He has a unique head piece, exclusive to him, with orange eyes and clenched teeth. His torso is coloured yellow and has a printing of a white vest underneath a red tube with two wires, leading to the center of his torso, connecting to a small device, and a gunsling at the bottom left of the torso. The back printing also has the white vest and the red tube, but with a

grey pipe attached to the white vest. His arms are yellow, and his hands are, like his head, coloured sand green. His leg connector piece is light stone grey, and his legs are yellow. He is armed with a blaster rifle.The 2017 Bossk has printed legs that show his claws and trousers in a pale yellow with grey , his hands and head are are olive green and he has a printed torso and back which show his flightsuit colured pale yellow , grey black and red . He also has a stud shooter .

Bossk has a Rebel Pilot torso coloured yellow, yellow arms, sand green hands, and yellow legs. His head is sand green and has red eyes and clenched teeth. He is armed with a blaster (bullhorn piece with a transparent red stud).

In LEGO Star Wars III: The Clone Wars, he was originally planned to be in the game, but was replaced with Savage Opress. The offcial game website stated the code to unlock Bossk was 2KLW5R, but the code does nothing in the actual game. However, Bossk is playable in the portable version.

In the games, Bossk has the ability to jump, shoot, grapple, throw a thermal detonator, and access panels with a bounty hunter logo.

The son of Cradossk, Bossk was a Trandoshan who began his career of bounty hunting as a slaver and hunter, capturing Wookiees for pelts or in order to hand her over to various crime syndicates and business conglomerates as slaves. During the Clone Wars, he accepted a job to assist the young Boba Fett, Aurra Sing and Castas in avenging Fett's father by killing the man responsible for his demise, Jedi Master Mace Windu. The plot was foiled and the Trandoshan and Mandalorian were thrown into prison. It was during that time that the two developed a partnership and after they escaped imprisonment following a riot, they went to Tatooine and established Krayt's Claw, a syndicate of experienced mercenaries including Dengar, Latts Razzi, C-21 Highsinger and former Sith acolyte turned fugitive Asajj Ventress.

By the time of the Galactic Empire, Bossk was a well-known bounty hunter and a member of the Bounty Hunters' Guild, an organization of bounty hunters, mercenaries and assassins that accepted bounties from various factions including Jabba the Hutt's criminal empire, Crimson Dawn, Black Sun and the Empire. He also developed a long-standing grudge against the smuggler Han Solo and his Wookiee comrade Chewbacca, after a run-in with the duo, which resulted in the Trandoshan not only losing the chance of capturing Chewie's Wookiee friends but also in the destruction of his ship, although he would replace it with the Hound's Tooth, which became his signature ship. Despite their earlier partnership, relationships between Bossk and Boba Fett deteriorated, and although they continued working together on several occassions, the two would also be rivals. Such was the case that the two were hired alongside Zuckuss, 4-LOM, Dengar and IG-88 by Lord Darth Vader to capture Han Solo's freighter, the Millennium Falcon, and bring it's crew alive before the Empire. This assignment would put Bossk in direct competition with Fett, with his old partner beating him to the job, having tracked the Falcon to Cloud City on Bespin. Nonetheless, the Trandoshan met up with Boba at Jabba's Palace and accompanied the crime lord's retinue aboard the Khetanna.

Bossk would survive the ensuing fight and would clash with Boba Fett one more time at the Mos Eisley Cantina. Despite being broken and defeated, the Trandoshan refused to give up information stolen from Slave I, making the Mandalorian-armored mercenary utter the unthinkable words: "You win", before transferring a large sum of money into his former friend and rival's account.

Years after the Battle of Endor, Bossk retired from professional hunting. He later ran into his old foe, Han Solo, while on a space station orbiting Ord Mantell during the Yuuzhan Vong War. When he heard of Chewbacca's death, Bossk rubbed it in Solo's face, receiving a broken snout in return. The encounter escalated into a fight, and the two were put into arrest cells. Solo was allowed to leave shortly before the invasion of the space station, but Bossk had to stay. The station was later destroyed, but just before the explosion, an escape pod jettisoned.

Bossk has also appeared in the Season Two of LEGO Star Wars: The Freemaker Adventures series, hired by Graballa the Hutt together with the likes of Dengar, IG-88, 4-LOM and Zuckuss to capture Rowan Freemaker and his siblings. 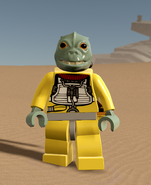 A back view of the minifigure 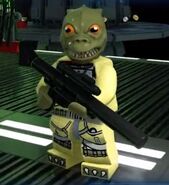