Boulderax is made up of two pieces, a head, and a body. The head is stone grey, and is textured like an uneven rock. The body is made up of 3 smaller pieces, but comes assembled in the box. Two of the pieces are arms, which like all minifigures, are able to hold objects. However, their wrists do not turn like the normal minifigure, and their hands are also much larger. The third piece is the main part of the body. It is mostly made up of transparent green plastic, but it also has chunks of stone grey in it, which makes it look like a mixture of large pieces of green crystal and rocks. The entire body piece has the same rocky texture as the head. The head is attached on a hinge, allowed the entire thing the flip upwards. When open, the inside of the body is hollow, allowing you to put a crystal inside of it, and close the mouth.

The Boulderaxes are strong, but slow and not very smart. Once they start attacking miners, they enjoy smashing things so much that they forget about the crystals. Since they're not very smart, Glaciators try to get them to do their dirty work for them. The Boulderaxes will sometimes attack the Power Miner's vehicles just for the fun of it. However, Boulderaxes are also one of the least common rock monsters.

Boulderax is available to be used in the Rock Rocket game. However, like Sulfurix, Boulderax must be unlocked to play in Rock Rocket. His code is Blue - Blue - Green - Yellow - Yellow. 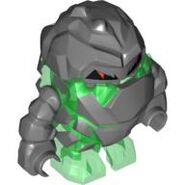 A CG image of Boulderax

Rock Monsters and Lava Monsters
Add a photo to this gallery
Retrieved from "https://brickipedia.fandom.com/wiki/Boulderax?oldid=2004454"
Community content is available under CC-BY-SA unless otherwise noted.
... more about "Boulderax"
RDF feed
Accessories
Green Crystal +
Appearances
8957 Mine Mech
852505 Green Rock Monster Keychain +
ArticleRating
4 +
Image
Rock.jpg +
InfoboxTemplate
Minifigure +
ShopDescription
Strong, slow, and dumb as a bag of rocks, Boulderax will fight a Thunder Driller just for the fun of it. Sometimes he gets so busy smashing the Power Miner's equipment that he forgets to take the crystals he came for! +
Theme
Power Miners +
Title
Boulderax +
Years
2009 +