"I’m gonna be the greatest!"
―Boxer

The Boxer is a Collectable Minifigure that was released in August 2011, as one of the sixteen minifigures from 8805 Minifigures Series 5.

The most notable feature of the Boxer is the fact that his torso, instead of having normal hands, has large red boxing gloves. As well as this, his torso is printed with a muscular design, and a belt.

His legs are printed with red and yellow pants. His head is double-sided. One side shows a smiling, confident expression, and one has a black eye, and a grimace. He wears a red sparring helmet. 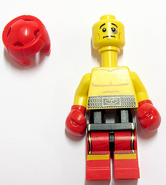 The printing on the other side of the Boxer's head