Brain Attack is an app released in January, 2013, coinciding with the 2013 Hero Factory sets. It is available on the Apple App Store, on Google Play and on LEGO.com and will be updated throughout 2013 with additional content and features.

At the main menu, players first choose whether they want to enter a code, upgrade their characters, or begin playing the game. There is also a currently-unknown option involving their LEGO ID. Selecting "Upgrade" allows the player to customize their hero with different weapons or armour, while after "Play" is selected, the player chooses Furno, Bulk, Breeze or Rocka as a sidekick and begins the game. There are four locations where the player battles the evil brains: the Space Port, the Scrap Yard, the City Streets, and the Shopping Mall. The player then fights evil brains and the villains they have taken control over. During the gameplay, they can switch weapons and find health and enemies through the use of icons on the screen. Also displayed are the hero's and sidekick's health and achievements. During the game, the player also receives points which can be used to upgrade their firepower and defences.

When swarms of evil brains begin attacking Makuhero City, it is up to Hero Factory to venture out and stop them and the villains they have brought under their control.

The sidekick selection menu, where players choose their sidekick. In this image, Furno and his stats are depicted

The sidekick selection menu, with Rocka and his stats being depicted

The sidekick selection menu, with Breez and her stats being depicted

The sidekick selection menu, with Bulk and his stats being depicted

One of the in-game locations

The player's hero and sidekick in one of the in-game locations, beneath an ad for the fictional Hero News Network

The player's hero and sidekick during gameplay, fighting against some evil brains and enemies brought under their control

The player's hero surrounded by several other heroes, who have been brought together by a Team Assemble boost crystal

Two heroes dancing to "Gangnam Style" in the selection menu

A screenshot from the trailer stating the game's creators, Amuzo, as well as the purchasing locations 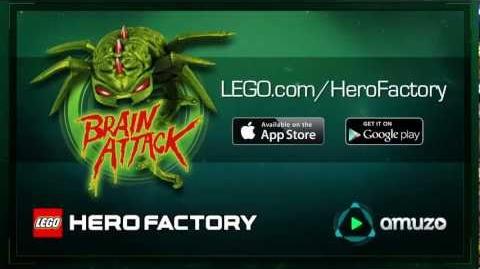 Community content is available under CC-BY-SA unless otherwise noted.
... more about "Brain Attack"
RDF feed
ArticleRating
3 +
Genre
Action +
Image
Brain_Attack_App_Logo.png +
Img1
BrainAttackAppBrains2.png +
Img2
LEGOBrainAttackScreenshot4.jpg +
Img3
BAtkBruizer.png +
Img4
LEGOBrainAttackScreenshot5.jpg +
Img5
LEGOBrainAttackScreenshot2.jpg +
Img6
BAtkPyrox.png +
Img7
BAtkOgrum.png +
Img8
LEGOBrainAttackScreenshot3.jpg +
Img9
BAtkScarox.png +
Platforms
iOS 4.3+, Android 2.0.1+ +
Publishers
Amuzo +
ShopDescription
LEGO® Hero Factory Brain Attack Feature … LEGO® Hero Factory Brain Attack Features</br></br>Coming January 2013</br></br>Enjoy the latest, all-action LEGO® Hero Factory game, featuring awesome 3D graphics, incredible weapons and an army of evil brains. Makuhero City is under attack and only you can save the day!</br></br>* Defend Makuhero City and stop the waves of brains attacking the Hero Factory</br></br>* Customise your hero with fantastic weapons and armour</br></br>* Select Furno, Bulk, Breeze or Rocka to fight as your sidekick</br></br>* Earn game points to upgrade your firepower and defences</br></br></br>The Hero Factory needs your help. Can you be its greatest defender?</br></br>Available on the Apple App Store, on Google Play and on LEGO.com, the Hero Factory Brain Attack game allows you to explore previously unseen areas of Makuhero City. Make use of the latest technology the Assembly Tower has to offer, including blasters, swords, axes and mech-bows. Have you got the skill to stop the mega-villains Pyrox, Ogrum, Bruizer and Scarox, as well as their hordes of henchman and the waves of scuttling brains?</br></br>This is the first release of a game that will be updated throughout 2013 with lots of additional content and features. Check for updates!l content and features. Check for updates! +
Theme
Hero Factory +
Title
Brain Attack +
Txt1
The Brains +
Txt2
Breez +
Txt3
Bruizer +
Txt4
Bulk +
Txt5
Furno +
Txt6
Pyrox +
Txt7
Ogrum +
Txt8
Rocka +
Txt9
Scarox +
Advertisement