Brains, also known as Dr. Brains, is the scientist of the Power Miners, and later a member of the Atlantis Expedition.

Brains looks very much like an intelligent individual, fitting his name. His looks vary depending on the theme, but is clearly recognizable as the same character. In both themes, he has an eyepiece that covered one eye, and a mustache that is a gray colour. In the Power Miners theme, he wears a suit similar in appearance to Duke's, although his torso, sleeves, and gloves are white and his uniform's emblem shows a test tube instead of a drill. While with the Power Miners, his eyepiece simply attached via a "bar" to the side of his head.The actual eyepiece is just circled around his right eye and showed something shaped like a diamond piece, likely resembling a blue crystal in general.

In Atlantis, the eyepiece appears more like eyeglasses, with one glass much larger than the other. The "bar" goes out both sides, and one small eyepiece circled around his left eye. It appears as though it had no meaning except to hold the larger eyepiece in position. The larger eyepiece was also a large circle, but it had a green piece of glass covering the eye. On the piece of glass is a red triangle with a circle around it, likely resembling the last key of Atlantis, next to some kind of vertical scale or chart. Therefore, the eyepiece could be a heads-up display showing the main target of the respective mission. Brains' Atlantis clothing is also similar to that of all the other divers during the theme's second year.

Brains initiated the Power Miners operation, and acquired the self-motivated directive to bring a Rock Monster to the surface to be studied. He always drove a vehicle or machine that somehow was able to capture a monster. The vehicles used for digging and mining were driven by the other miners. He obtained his nickname, "Brains," from Rex when they first met. When the Power Miners disbanded after completing their mission in 2010, he joined the Atlantis Expedition crew, which lasted for another year. In the Atlantis theme, he operated only one vehicle, the Deep Sea Raider. He was the scientist of both crews. 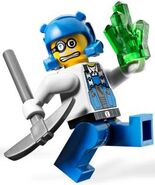 Deutsch Français
Community content is available under CC-BY-SA unless otherwise noted.
... more about "Brains"
RDF feed
Accessories
Dynamite
Pick Axe
Helmet
Goggles
Diving Helmet
Flippers
Harpoon Gun +
Appearances
8961 Crystal Sweeper
8957 Mine Mech
8964 Titanium Command Rig
8190 Claw Catcher
7984 Deep Sea Raider +
ArticleRating
2 +
Image
'"`UNIQ--tabber-00000001-QINU`"' +
Img1
Brains.png +
Img2
pm032.jpg +
Img3
AG11.png +
InfoboxTemplate
Minifigure +
ShopDescription
A famous scientist, he was nicknamed "Brai … A famous scientist, he was nicknamed "Brains" by Rex shortly after they met and the nickname stuck. Although he's anxious to save the world from the mysterious rumblings, he's also fascinated by the rock creatures and their underground domain. He'd love to capture some alive to bring back to the surface, so he could learn all about them.surface, so he could learn all about them. +
Theme
Power Miners, Atlantis +
Title
Brains +
Txt1
Brains in his
Power Miners suit +
Txt2
Brains in his
Lava Protection suit. +
Txt3
Brains in his
Atlantis diving gear +
Variations
Power Miner
Lava Protection Suit
Atlantis Diver +
Years
2009 - 2011 +
Advertisement