The Brawny Boxer is a minifigure from 8909 Team GB Minifigures, released in 2012 to celebrate the 2012 London Olympic Games.

The Boxer has white legs, printed with wrinkled blue shorts, and some yellow skin. His torso is blue, and features the Team GB logo in white on its upper left corner. He wears a white belt with a buckle that has "GB" written on it in red letters. He has yellow arms, and blue boxing gloves in place of hands. He wears a red ribbon with a gold medal hanging from it around his neck. His yellow face has a cheerful, confident, expression, and he wears a blue padded head-protection device printed with the Team GB logo in red and blue. 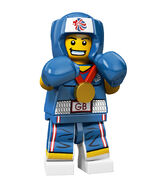 Digital rendering
Add a photo to this gallery
Retrieved from "https://brickipedia.fandom.com/wiki/Brawny_Boxer?oldid=1834250"
Community content is available under CC-BY-SA unless otherwise noted.