Break Jaw is a henchman of Dr. Inferno.

His name is "Break Jaw" because he wears a metal helmet with an underbite. He has the standard suit of an Inferno Henchman. He also has the same helmet as the Magma Commander. He has been featured in several plots by Dr. Inferno. His first "starter" mission was to locate and study a treasure map deep in a swamp. But that plot was foiled by Agent Charge who burst into Break Jaw's camp with his motorcycle. Break Jaw escaped in his mini-boat but the map was retrieved by Charge. Dr. Inferno was happy with his performance and sent him with a prisoner (Agent Trace) to a buoy sort of base and started to feed her to sharks. But Agent Chase came in a boat and saved Trace. Dr. Inferno was not happy, but he gave Break Jaw one more chance. He sent him to work along side Slime Face in a mission to recover a gem chest deep in the ocean. Break Jaw came and him and Slime Face fought well, but the chest was taken by Charge and Chase. Break Jaw, along with Slime Face, was retired from Dr. Inferno's forces for their poor performance. 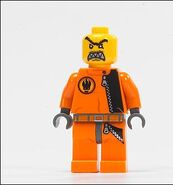 Break Jaw's Face without his helmet

Break Jaw on his Jet Ski

With his helmet on