Brick Daddy is a criminal in the August 2010 wave of Space Police III sets. He wears purple clothing with the mark of the Black Hole Gang in the middle of it. He is exclusive to the set 5984 Lunar Limo.

Brick Daddy is the boss of the Black Hole Gang. He plans and orders, letting his henchmen commit the crimes all over space. No Space Police officer has ever seen his face, and so there are rumours that he does not exist, or that he is actually a clone or a robot. Brick Daddy is a master in evading the police.[1]

His sole video appearance is in the Lego Space Police Building Contest, where he hired Craniac and Jawson to steal a vault from the bank. After they successfully bring the vault into his office, he gives Jawson fried chicken. When Craniac opened the vault, Brick Daddy pushed him away, ran into the vault, threw him some money, then laughed.

Brick Daddy, Front and Back

Brick Daddy at the toy fair 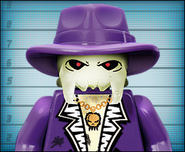 A closeup of Brick Daddy.