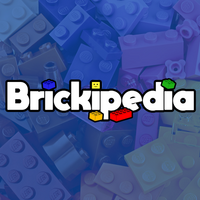 Brickipedia, located at brickipedia.fandom.com, is Fandom's largest LEGO wiki, and was founded on January 29, 2006. Brickipedia's goal is to provide a free online encyclopedia on everything LEGO, created and maintained by a community of users just like you. Through the efforts of many users since then, Brickipedia has reached a size of 37,345 articles.

As an encyclopedia about LEGO, Brickipedia's main focus is on the documentation of official LEGO products (such as sets, games and minifigures) and related subjects (themes, history etc.).

The first days of the LEGO wiki

When this wiki was first created, Brickipedia was obviously small. The only user active was the first administrator, Darth smith. However, this user left this wiki and other wikis alike, and has been inactive since October of 2007.

After that, roaming editors would make some edits (50 edits were considered a lot, considering the amount of articles then). The number of active users started to grow, reaching 44 at the end of 2008, and 146 at the end of 2009.

Today, Brickipedia is a popular, well known website with users who strive to edit to show off their knowledge for LEGO. We even have articles based on sets from the next year coming!

We also have votes and forums on voting for different things, such as Brickipedian of the Month, Featured Article of the Month (which now has a new Review Board), and even Userbox proposals, so that you can spice up your userpage to look even better than before! You can also ask for items or pages to be deleted.

If you have any knowledge of LEGO, or even just want to help out on a wiki, come join us! We want to know how much you love LEGO ourselves.