Brickster-Bots[1], alternatively written as Bricksterbots,[2] are recurring enemies from the LEGO Island series.

Brickster-Bots tend to vary in appearance between different games, but they consistently have a grey cube-shaped head, grey hands, and a white torso with prisoner stripes and the number "23768" (matching that of the Brickster). Depending on the game, their arms may be white or grey, and their legs may be grey or black.

In the PC version of LEGO Island 2, certain Brickster-Bots have differently-colored heads, being red, blue, yellow, or green. In the PS1 version, the color variations have the colors on their shirts rather than their heads.

In LEGO Island 2 and in Soccer Mania cutscenes, Brickster-Bots had 1x1 plates attached to their feet, which appear to be embedded rocket boosters allowing them to fly. In Island Xtreme Stunts and the box art for Soccer Mania, the 1x1 plates were removed from the design, though they still have boosters in their feet.

In LEGO Island 2 and Soccer Mania, Brickster-Bots have hands that are closer to hexagonal shapes to emphasize their robotic appearance, while normal minifigures have round hands in those games.

The Brickster-Bots are the robotic henchmen of the Brickster, originating from Ogel Island.

The Brickster-Bots originally appeared in the video game LEGO Island 2: The Brickster's Revenge, acting as common recurring enemies on the stages on LEGO Island. They can be stunned by throwing pizzas at them or hitting them with a double pizza splat, and their heads are then collected by Pepper when he gets close to them, though visually the Brickster-Bots appear to just vanish. The differently-colored Brickster-Bots must be tracked down and defeated in order to progress, while the normal grey-headed Brickster-Bots are merely optional.

In the Game Boy Color version of LEGO Island 2, Pepper shoots pizzas at them from a handheld Pizza Chukka. Initially this simply stuns the Brickster-Bots briefly, but an upgraded Pizza Chukka given to Pepper by a Forestman on Castle Island makes their heads explode, causing them to collapse into a pile of pieces.

The Brickster-Bots also appeared in Island Xtreme Stunts, where they mostly caused mischief around the island and aided in filming the movie Xtreme Stunts. They live at the construction site and have stolen wheels from Nubby Stevens, blown off Papa Brickolini's hat, and push you away. Throwing pizzas at them stuns them, while landing a double pizza splat on them while they aren't stunned defeats them completely. 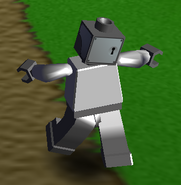 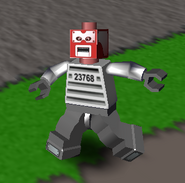 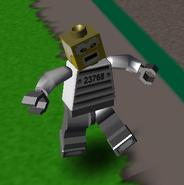 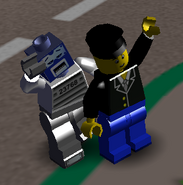 A Brickster-Bot in the LEGO Island Comic Adventures

Early sprites for the Brickster-Bots in the Game Boy Advance port of LEGO Island 2.