Bronze Tiger is a DC Comics Minifigure who first appeared in LEGO Batman 3: Beyond Gotham.

When Ben Turner was a child he witnessed his parents getting attacked by a criminal, at which point the young Ben took a knife and killed the criminal himself. Since then he was left with rage inside him which he learned martial-arts to try and subdue, becoming one of the world's best martial-artists.

Years later, Ben Turner was brainwashed by the League of Assassins and received a tiger mask to become Bronze Tiger. After clashing with Batman a few times, Bronze Tiger fell in the hands of Amanda Waller, who deprogrammed him in exchange to joining the Suicide Squad, alongside Captain Boomerang, Deadshot, an amnesiac Lashina, Poison Ivy and others. 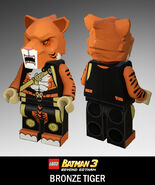