"Bruce Wayne? Uh, who's that? Sounds like a cool guy!"
―Batman, attempting to hide his secret identity in The LEGO Movie

Bruce Wayne (superhero alias Batman) is Batman's secret identity. He was originally exclusive to the Batman theme, but was reintroduced for the Super Heroes theme in 2012. He also appears in The LEGO Movie.

The Bruce Wayne minifigure first appeared in the Batman theme where he was exclusive to 7783 The Batcave: The Penguin and Mr. Freeze's Invasion. Bruce had a standard male hairpiece coloured black. His face had a slight smile with a line to represent his chin beneath. He has two long eyebrows that are fairly big, but not big enough to be bushy, and two black eyes. Bruce sports a Dark Blue suit torso and matching legs.

A redesigned Bruce Wayne appeared in 6860 The Batcave. He has an updated hairpiece which had been introduced in the Harry Potter reboot where it was used for Draco Malfoy and Fenrir Greyback, but Bruce is the first minifigure to use it in black. Bruce's face has been drastically redesigned. It has similar eyebrows, which are slightly longer and pointed downward, and the same eyes. Bruce's mouth is now positioned in a wide, but slight frown. His face has been updated with lines to make his face look shallower with cheek bones. He also has a line for his chin, but it is a darker flesh rather than black. Bruce is still wearing a blue suit, but it is now the duller Sand Blue shade. He has Sand Blue legs to match his torso.

This version is based on Bruce Wayne's appearance in some comics.

In LEGO Batman: The Videogame, Bruce Wayne's appearance is identical to his appearance in 7783 The Batcave: The Penguin and Mr. Freeze's Invasion. He always carries a black briefcase with him and is able to use it to attack enemies.

In LEGO Batman 2: DC Super Heroes, Bruce Wayne is identical to his appearance in 6860 The Batcave. At the opening scene, He is seen wearing a black suit while attending the Man of the year award ceremony. He is also able to use Batman's suit signals and will change into Batman in the respective signal's suit when he comes into contact with it.

When a young Bruce Wayne witnessed his socialite parents shot dead by the mugger, Joe Chill, he vowed to bring justice to the criminals infesting Gotham City. He then trained himself in detective skills, sciences, engineering, escape artistry, martial arts, and criminal psychology. But Bruce realised that those skills would not be enough to stop the superstitious and cowardly lot plaguing the streets. While he was in his study reflecting on his parents' deaths, a bat flew into the window, both startling and inspiring him at the same time. He would become the bat to strike fear in those who preyed upon the innocent. And so, Bruce then took his mantle as a crime fighter and became known as Batman.

At first, Batman fought "plain-clothes" villains without any super powers or gimmicks until about six months into his career when he encountered Mr. Freeze, a scientist specialising in cryogenics-turned villain trying to rescue his dying wife. Batman's rogues gallery expanded to include other villains, many of which are insane, such as Bruce Wayne's former best friend hideously scarred, Two-Face, The Riddler who challenges Batman's intellect rather than his strength, Gotham's gentleman of crime with an obsession for birds and umbrellas, The Penguin, and his arch-enemy, The Joker, among others.

While Batman's rogues gallery grew, his allies did too to include his butler, Alfred who tends to Bruce Wayne's needs behind the scenes and serves as his confident, Tim Drake, better known as Robin III, Dick Grayson as Nightwing, or formerly the first Robin, Police Commissioner James Gordon, and his daughter, Barbara Gordon who became Batgirl, Jean-Paul Valley as Azrael, a college student who had been brainwashed by a religious organisation, and The Spoiler, or Stephanie Brown who is the daughter of a minor villain, as well as occasional allies such as Huntress (Helena Bertinelli) and Catwoman (Selina Kyle, who are both allied with and against Batman and his other allies at times. Batman also leads the Outsiders, a rag tag group of Super Heroes operating in Gotham City, which includes heroes who are not directly allied with Batman otherwise, such as Katana.

Bruce Wayne's love interests include Talia Al Ghul, the daughter of Ra's Al Ghul and the mother of his son, Damian Wayne; and Selina Kyle (Catwoman). He has also shown attraction to Wonder Woman, Vicki Vale and Zatanna.

Bruce Wayne is a playable character in both LEGO Batman: The Videogame and LEGO Batman 2: DC Super Heroes.

In LEGO Batman: The Videogame, Batman is the main character. He is playable not only as Batman, but also as Bruce Wayne. He uses a briefcase as a weapon by swinging it around and has no special abilities.

Batman is the video game's main character, but as Bruce Wayne, he plays no part in the story. However, his portrait is built as a minikit and a Red Brick is hidden behind his portrait in Wayne Tech during the level An Enterprising Theft.

He can be unlocked by collecting 45 gold bricks. He can be found at the top of Wayne Tower. In the portable versions, his minikit can be found on the level Gotham Theatre, and can be purchased for 20,000 studs.

The Super Heroes variation's back printing 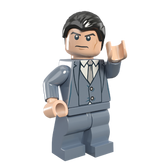 Bruce Wayne in The LEGO Movie.

There’s no one in Gotha … Bruce Wayne</br></br>There’s no one in Gotham City cooler than LEGO Bruce Wayne a billionaire, businessman and suave bachelor.</br>He’s loved and respected by everyone… but he has a secret that almost no one knows. When</br>trouble strikes on the streets and the Bat-signal appears in the night sky, this meticulous</br>minifigure pops apart his bricks to transform into LEGO Batman - The Caped</br>Crusader and last line of defense for the citizens of Gotham City.f defense for the citizens of Gotham City. +  and To most, Bruce Wayne appears to be your ty … To most, Bruce Wayne appears to be your typical handsome billionaire playboy, enjoying parties at his family mansion and occasionally putting in an appearance as the head of Wayne Enterprises. But what only a few close friends and allies know is that Bruce is secretly Batman, who has pledged to protect Gotham City from crooks and super villains everywhere!===LEGO Batman Movie===As the charming, handsome and wealthy CEO of Wayne Industries, Bruce Wayne is the envy of all who meet him. No one suspects and only a few trusted individuals know that the seemingly trouble-free billionaire secretly has a super-secret Super Hero secret identity. If you guessed he was Superman, you’d be close…but wrong.Bat-Fact: Has never been seen in the same place as Kite Man. Hmm, could it be…?Agility: 9<br/>Fighting: 11<br/>Strength: 7<br/>Intelligence: 11<br/>Speed: 7Intelligence: 11