Buckbeak is an animal in the Harry Potter theme. He is a gray Hippogriff who was once cared for by Rubeus Hagrid.

When Hagrid presented Buckbeak to the third years in his first Care of Magical Creatures class, Draco Malfoy insulted Buckbeak, who instantly attacked him with his razor-sharp claws. Enraged, Malfoy pretended to be injured for three months. Malfoy's father, Lucius Malfoy, furious about the attack on his son, demanded Buckbeak executed. However, thanks to a Time-Turner of Hermione Granger's, she and Harry Potter rescued Buckbeak from his terrible fate. Later, after Sirius Black said good-bye to Harry, he flew away on Buckbeak. After Sirius was killed by Bellatrix Lestrange, he lived with Hagrid under the name of Witherwings. In the battle of Hogwarts, Hagrid slammed Walden Macnair into a wall as punishment for trying to kill Buckbeak. 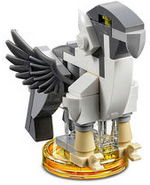 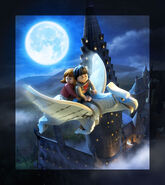