During World War 2, James Buchanan "Bucky" Barnes was the trusted sidekick of Captain America and a founding member of the superhero team "The Invaders". In 1945 Bucky and Cap were foiling an evil plot set in motion by Baron Zemo. This adventure took them aboard the plane which was damaged causing it to explode with Bucky still aboard and which sent Cap into the frozen water where he would be preserved.

As it turned out, Bucky survived (albeit without an arm) and he was found by operatives of the Soviet Union who put him into cry-sleep and brainwashed him into being an elite assassin/spy known as "The Winter Soldier". Decades later, the Winter Soldier became an enemy of his former partner Captain America.

James Buchanan "Bucky" Barnes was a close friend and ally to Steve Rogers and assisted him in various missions as a member of the Howling Commandos. During one mission he was seemingly killed in action by falling off a train on the side of a mountain.

However, he survived and was frozen. He was revived by the evil organization HYDRA and received a metal arm, but lost his memory. He was trained to be an assassin, given the code name Winter Soldier, and sent on many missions.

He fought with Steve who managed to restore Bucky's memories. Bucky then re-teamed up with Rogers, and even inherited the Captain America mantle for a while.

The Winter Soldier alongside Scarlet Witch and Captain America 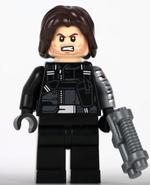