The Builder is a Pirates minifigure introduced in 2009.

The Builder wears an earth green bandana and pants, along with a sleeveless white-and-green striped shirt with a pair of leather belts. The physical minifigure has a clean-shaven face, although he has stubble in 4850307 LEGO Battles, more closely resembling the face of a minifigure from 7244 Speedboat; otherwise, the two designs are identical. The Builder carries a cutlass in 6243 Brickbeard's Bounty, or a small hammer in LEGO Battles.

In the instruction booklet comic for 6243 Brickbeard's Bounty, the Builder is depicted wearing the black tricorne hat of the Gunman.

The Builder is a member of Captain Brickbeard's pirate crew, sailing aboard the Brickbeard's Bounty. In the set's comic, the Builder joins the search for a treasure map on the beach, then works with the Gunman to fire one of the ship's cannons. In the Quest for the Pirate Dictionary! LEGO Club Magazine comic, the Builder is among the pirates celebrating the discovery of the Pirate Dictionary.[1] 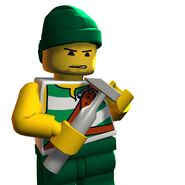 The Builder in LEGO Battles

Concept art of a Builder being bribed by the Cavalry