Bumblebee (Karen Beecher) is a DC Comics minifigure released under the DC Super Heroes Girls banner in 2017. She was first released in minifigure format in 2020.

Karen Beecher was a scientist who created a bumblebee-themed suit. She used it against the Titans to make her boyfriend Mal Duncan look good in front of the rest of the team. After she revealed her ruse, Karen became a member of the Titans under the name Bumblebee. They became part of the team Titans West, relocating to San Francisco. While they eventually retired to get married and start a family while she was working at S.T.A.R. Labs, they would occasionally come out of retirement during a major crisis. 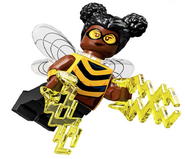