This article is about the Alien Conquest minifigure. For other businessmen, see Businessman (Disambiguation).

The Business Man,[1] also known as a Civilian,[2] is an Alien Conquest minifigure released in 2011.

The Business Man has a blue suit with a tie and a brown suitcase. He also has a double-sided face. He has only appeared in two sets to date. 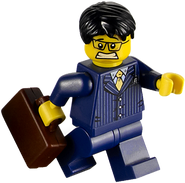