Buttercup is a Powerpuff Girls minifigure introduced in LEGO Dimensions in 2017.

Along with Blossom and Bubbles, she was first created by Professor Utonium with sugar, spice, everything nice and Chemical X. She serves as one of the main protagonists in the show along with her sisters.

Among the Powerpuff Girls, Buttercup is the most tomboyish and aggressive, usually having an angrier disposition in comparison to Bubbles and Blossom. However, she happens to be somewhat of a troublemaker. She enjoys fighting villains and criminals and despises girly things like skirts and scrap-booking.

Buttercup would rather hang out with The Ganggreen Gang, a gang of five teenage hoodlums that are green-skinned and unhealthy looking. She really enjoys playing death ball with them and is considered a very good friend with them. In particular, Buttercup hates being called "princess", as she will fly into an annoyed rage at any who calls her such. 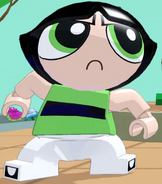 Buttercup in LEGO Dimensions
Add a photo to this gallery