Buzz Lightyear is the deuteragonist of the Disney/Pixar Toy Story tetralogy. Unlike the films, his wings can not pop out of his back; however, the wings can be taken apart from his back, giving the appearance that his wings are folded in.

Buzz Lightyear is the deuteragonist of all four Toy Story movies. He is a Space Ranger for Star Command and a friend of Woody's.

He makes his first appearance as a birthday present, and behaves quixotically for most of the film, believing himself to be an actual space ranger on another planet. Initially he has an uneasy relationship with Woody, who finds his delusions annoying and is paranoid about his owner replacing him with Buzz. Eventually Buzz accepts the fact that he’s a toy, depressing him for a while, but Woody’s own perspective on the matter impresses him and they cooperate more happily thence forward.

After noticing a collector who stole Woody from a garage sale, Buzz and some of his friends venture outdoors to trace Woody. Along the way, Buzz meets a limited edition version of himself with a utility belt, who behaves just as quixotically as he did in the first film and confuses the other characters, but later cooperates somewhat and chooses to stay behind with (his father) Zurg while the default Buzz and his friends save Woody from being sent to a Japanese museum.

The series features Buzz Lightyear, a famous, experienced Space Ranger that takes a crew of rookies under his wing as he investigates criminal activity across the galaxy, and attempts to bring down Evil Emperor Zurg once and for all.

Buzz and his friends arrive at a daycare, who are initially pleased to be there, especially having been unplayed with for so long, but find the daycare’s younger visitors surprisingly unpleasant. Lotso’s gang then reset Buzz, returning him to his deluded state, and he agrees to prevent the other toys from leaving the daycare. They manage to reconvert him to their side, but only when he’s in Spanish mode, which is undone through a collision with a falling object. He and his friends eventually return to their owner’s residence, who in turn donates them to a gentle girl who was visiting the daycare.

During a camping trip, Buzz pursues Woody who in turn pursues Forky after they get lost in an antique store, but an employee at the carnival mistakes him for a prize and fastens him to a wall. After escaping from the wall, Buzz and several other toys retrieve Woody from the antique store, but Woody still wants to retrieve Forky, which the other toys do not want to do. Buzz, very reluctantly, joins them in abandoning Woody. They later meet one last time outside, with Woody deciding to remain with Bo Peep at the carnival and Buzz and the other toys returning to the camper. 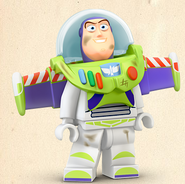 DUPLO version with no wings from the sets 5691 Alien Space Crane and 5658 Pizza Planet Truck. 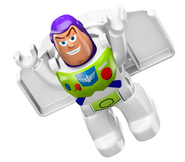 DUPLO version with wings from the 5659 The Great Train Chase set.