"Where are the fights?"
―Bytar

Bytar is a Ninjago minifigure. He is the warrior from the Constrictai Serpentine tribe. He was released in a Fall 2012 Booster Pack, and in a Summer 2012 set 9448 Samurai Mech.

Bytar has appeared in a total of 13 episodes of Ninjago: Masters of Spinjitzu- 9 in Season 2, And 4 in Season 3. All of these appearances are cameos, therefore it is difficult to describe, in detail, Bytar's background.

There are some minors details that happened in the show. He and his tribe were the fourth to be released from their Serpentine tomb, which is located in the desert in the Mountain of a Million Steps. He went to the ancient city of Ouroboros with Pythor and the rest of the Serpentine at first, but retreated in one of the tombs at the time the Great Devourer was awakened. 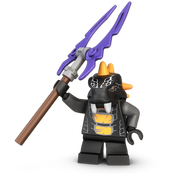 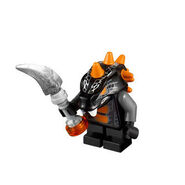 As he appears in his booster pack 9556 Bytar

Bytar with a flail (also wielded by Spitta and Fangdam)