Círdan the Shipwright is a character that appears in LEGO The Lord of the Rings: The Video Game.

Círdan the Shipwright was the bearer of the Great Ring Narya, which he in turn gave to Gandalf. Though once a great warrior who joined in the battles against both Sauron and the Witch-King, he eventually retired to the Grey Havens, where he became dedicated to building ships to enable the Elves to return to Middle-Earth. He was later present when the Bearers of the Three Rings departed Middle-Earth.

Cirdan and Gil-Galad with Great Rings 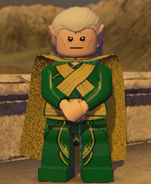 Add a photo to this gallery
view · talk · edit Middle-Earth minifigures
Retrieved from "https://brickipedia.fandom.com/wiki/C%C3%ADrdan_the_Shipwright?oldid=1927240"
Community content is available under CC-BY-SA unless otherwise noted.