C-3PO is a character in the Star Wars franchise. He was first released as a minifigure in 2000 and has made eleven appearances in sets so far. He appears in The LEGO Movie voiced by Anthony Daniels, one of the original Star Wars voice actors.

C-3PO (pronounced see-threepio) was a protocol droid built by Anakin Skywalker before Star Wars Episode I: The Phantom Menace. When Anakin left to become a Jedi, he was left with Shmi Skywalker, Anakin's mother, Anakin telling 3PO that he would make sure his mother didn't 'sell him or anything'. In Episode II, Anakin and Padme came to Tatooine, and brought C-3PO back with them after Anakin's mother died. They went to Geonosis, where C-3PO had his head knocked off and replaced with a battle droid head, while his head was placed on a battle droid. In the resulting battle, he was destroyed and later repaired by R2-D2. At the end of Episode III, his memory was erased so that he had no memory of Anakin Skywalker or his children. He was then given to Princess Leia.

In Episode IV, he was traveling with Leia aboard the Tantive IV when it was attacked and boarded by Imperial forces. He escaped in an escape pod with R2-D2, and landed on the planet of Tatooine, where he was found by some Jawas, who sold him to Owen Lars, Luke Skywalker's uncle. He went with Luke to find R2-D2, and they met up with Ben Kenobi. After Luke's uncle and aunt were killed by Stormtroopers, he went with Han Solo and Chewbacca to the Death Star.

His main companion was R2-D2, and he is one of the few characters to appear in all nine films.

C-3PO appears in The LEGO Movie along with Han Solo, Chewbacca, and Lando Calrissian aboard the Millennium Falcon. He also appears in the background after every Master Builder is captured.

With R2-D2 in LEGO Star Wars II: The Original Trilogy

Front and Back of 2012 Variant 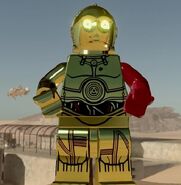 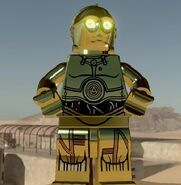 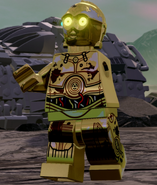