CHI is a stone of life for the creatures of the world of Chima. The creatures of Chima began fighting over this CHI for power, but in the wrong hands CHI can be very dangerous. The first CHI was discovered by the animals on Mount Cavora. Drinking it and rapidly evolved them into various sentient, bipedal animalian creatures. The few who didn't drink of it became the Legend Beasts. Most animal tribe leaders and warriors wear armour with a built-in CHI harness, which can channel its energy to empower the user. Using CHI underage, or using too much, can be very dangerous. In 2014 Fire CHI, which was orange rather than blue, was introduced. Chi in the Chima universe has different properties than Chi in Chinese culture, as Chi in Chinese culture is the life force of a human being.

The creatures of the world of Chima often wear armor with an orb in the center that contains CHI. They can survive without it, though they are much weaker. If enough CHI is obtained, a character (or ordinary Minifigure) can become an Ultrabuild. CHI is sometimes formed as water such as that of the CHI that flows on Mount Cavora and in the Sacred Pool of CHI. Most CHI has been guarded by the Lion Tribe for generations and was once shared throughout the land of Chima, but is now the reason of the war between at least eight of the animal tribes.

CHI is used for nearly everything in the land of Chima. It is used to give warriors great might, power vehicles, and power most weapons. However, weapons like the Royal Valious need recharging after use. Animal tribe warriors can place CHI orbs in the harnesses in their armor and become the size of an Ultrabuild. CHI is also used in Speedorz games as both a power source to the vehicles and the prize. Sometimes, Golden CHI is formed. When this happens, the orb is given to the tribe that performs the best in Speedor events. It is extra powerful, and can do things normal CHI can't, as it was seen altering the terrain of Lagravis' Speedor course.

In Season 3 it revives the Ice Tribe. It's shown that when they don't have a CHI orb in their harness, they remain unconscious. Also, since their harnesses are full, they swallow orbs of CHI to gain power.

The power of CHI and Fire CHI usually lasts for only a few minutes. However, on one rare occasion, when Vardy and his troops CHI'ed up and waited for hours, the CHI was still active. This is probable because they were inactive and used up less of the CHI's energy then fighting warriors.

In Fake CHI, Real Trouble, Crooler meets with a Raven-Eagle hybrid, alchemist named Reegull who offers her fake CHI. Cragger decides to give out the fake CHI to make up for what he's done. When he comes across the Ravens they tell him the CHI is fake, they refer to it as "Reegull's Chigull" and if it works they would sell it by the Truckload. After the chi wears out Crug who plugged on in begins to act like a bird. Razar then tells Cragger that the side effect will occur when the CHI is used up on the user. Cragger goes to see Reegull and he tells Cragger that it's part of his plan to make everyone in Chima like him. After this, Cragger goes around and collects all of the CHI. When he encounters the lions, Cragger assures them that he collected all of the CHI. The Wolves show up and decide to use the CHI. When they go to attack the lions, the side effect kicks in. At the end Cragger and Laval attach bellow plants to Reegull and pop them as he floats away.

This CHI is greener in color, after it's used up the user will believe they're a bird and will act like a bird. This goes away after a day.

CHI is mostly crystal, but can take the form of water. It is normally light blue in colour. However, the CHI that powers weapons of the evil animal tribes turns red to signify their evil intentions. CHI orbs are basically crystal balls with CHI crystals inside of them. 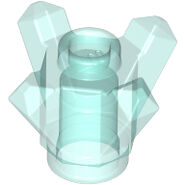 The piece used to represent a CHI Crystal. 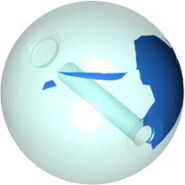 A LEGO piece often used to represent a CHI Orb.