This article is about the Star Wars minifigure. For the Batman minifigure that has the same name, see Bane.

Cad Bane is a Duros bounty hunter from the Star Wars theme who has had a minifigure made and released in 2010.

Cad Bane is made up of a large Indiana Jones like hat, breathing apparatus with two tubes, a torso with a brown jacket , legs, and a blue head with large red eyes. Both the head and torso of this minifigure have very exclusive and detailed printing. His hat is also a one of a kind part, which has only been released in three sets so far.

Cad Bane was a male Duros bounty hunter from the planet Duro who earned a reputation as the galaxy's best, deadliest, and most fearsome mercenary during the Clone Wars. Though he worked for a number of clients, his loyalty was ultimately to the Galactic Credit Standard, and by extension, the highest bidder. Bane employed a variety of weapons and allies to ensure that he always got his pay, and he became the leader in his line of work after fellow bounty hunter Jango Fett died in the First Battle of Geonosis. Bane's renown attracted the attention of Count Dooku and even the Dark Lord of the Sith Darth Sidious, the latter of whom employed him numerous times for his own means. Working for Sidious, Bane stole a Jedi Holocron from the Jedi Temple to unlock the Kyber memory crystal, a Memory crystal of all recorded Force-sensitive Younglings in the galaxy. After pilfering the crystal from Jedi Master Bolla Ropal on Devaron and forcing Jedi Knight Anakin Skywalker to unlock it, Bane was sent to kidnap four of the infants listed in the crystal. Despite being captured halfway through his job by Skywalker and his Padawan, Ahsoka Tano, Bane escaped from Jedi Masters Obi-Wan Kenobi and Mace Windu by luring them into a trap on his hideout, Black Stall Station.

Bane was later hired by the Hutt crime lord Jabba Desilijic Tiure and the Hutt Grand Council to break Jabba's criminal uncle, Ziro Desilijic Tiure, out of Republic custody on Coruscant. To do so, he formed a team of hunters to capture members of the Galactic Senate and force Supreme Chancellor Palpatine to free Ziro. Once he had liberated Ziro from the high-security Republic Judiciary Central Detention Center, Bane delivered him to the Hutt Council and disbanded his posse. When Ziro escaped from Nal Hutta, Bane was rehired to track down the crime lord, and though he arrived on Teth too late to secure his bounty, he managed to evade Jedi Masters Obi-Wan Kenobi and Quinlan Vos, who failed to apprehend him for his crimes. Bane eventually became the leader of an operation designed by criminal mastermind Moralo Eval and funded by Count Dooku, to capture Supreme Chancellor Palpatine for the Confederacy. Bane retained his formidable reputation throughout the Clone Wars, after which he became one of the Galactic Empire's preferred freelancers. He was known as the greatest bounty hunter since Jango Fett. 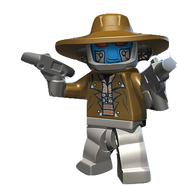 Cad Bane in a CGI animation. 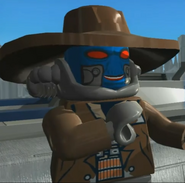 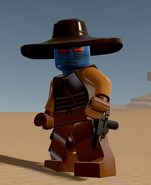