"My deadliness is equaled only by my beauty."
―Calamity Drone

Calamity Drone, also known as Calamity Droid,[1] is one of the characters in the 2014 film, The LEGO Movie. She serves Lord Business as part of the Super Secret Police branch in The Old West. Her "Ayaya!" cry is often heard in The Old West.

In The LEGO Movie, Calamity Drone accompanied Sheriff Not-A-Robot into catching Emmet, Wyldstyle, and Vitruvius. When she tries to catch Emmet during the chase, Calamity Drone was crushed by a wall that was knocked down by Wyldstyle and some pigs. 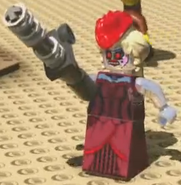 Appearance in the video game.

Deutsch Français
Community content is available under CC-BY-SA unless otherwise noted.
... more about "Calamity Drone"
RDF feed
Accessories
Musket +
Appearances
71004 The LEGO Movie Series
The LEGO Movie +
ArticleRating
3 +
Image
TLM 11.jpg +
InfoboxTemplate
Minifigure +
ShopDescription
“My deadliness is equaled only by my beaut … “My deadliness is equaled only by my beauty.”</br></br>She may look just like a beautiful Wild West can-can dancer, but Calamity Drone is one tough and dangerous robot. Whether she’s wielding an old-fashioned rifle or a new-fangled flamethrower, her itchy trigger finger makes her tend to blast first and ask questions later.</br></br>Calamity has been waiting a long time for some Master Builders to show up in her saloon so that she can fulfill her prime directive and capture them for Lord Business. Little does she realize that the most-wanted Master Builder of them all has been right under her nonexistent nose the whole time!under her nonexistent nose the whole time! +
Theme
The LEGO Movie +
Title
Calamity Drone +
Years
2014 +
Advertisement