"Noah Kuttler, a.k.a. The Calculator™, is a brilliant mathematical genius who has devised an unusual method for success as a super-villain. He engages in battle after battle with different Super Heroes, getting defeated each time…but his calculator costume records their fighting moves and powers, making sure that they can’t beat him the same way again!" —LEGO.com

Noah Kuttler a.k.a. the Calculator was a super villain with Obsessive Compulsive Disorder who was continuously defeated by various members of the Justice League. He devised a program on his computer to calculate a hero's powers and/or tactics to create a method from him from ever being affected by them. However, it was ineffective against heroes he has not yet been introduced to yet. Eventually he abandoned his costume for a period of time and became an information broker for supervillains. 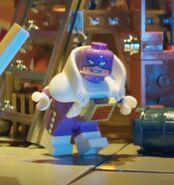