Calendar Man is a DC Comics minifigure who appears in The LEGO Batman Movie and LEGO DC Super-Villains.

Julian Gregory Day was a deeply disturbed man with a highly calculated mind and an obsession with dates, holidays and calendars. All of Julian's crimes are themed to fit the date on which he commits them. Eventually he was caught by the Batman and sent to Arkham Asylum.

Within Arkham, the Calendar Man's deranged mind served use for Batman and the GCPD as a consultant for certain crimes. As Calendar Man, his main costume is red and white with a calendar-inspired cape but he is known to switch costumes depending on the date. He is a very clean man and in-addition to being completely bald, he has the abbreviated names of the 12 months tattooed around his scalp.

Whenever a holiday rolls around, the Gotham City Police know that they’re going to have to deal with Calendar Man again. Wearing a cape made out of calendar pages, the date-obsessed villain commits crimes themed after holidays both big and small, leaving clues that make it pretty simple to track him down. No matter how many times he’s caught, though, Calendar Man swears that he’ll get his day to shine. Bat-Fact: Really looking forward to Leap Year. 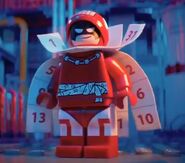