Cannibals are minifigures from the Pirates of the Caribbean theme. The theme (and the Minifigures) were released in May 2011. They are similar to the minifigures of the Islanders theme.

The cannibals inhabited the island Pelegosto, a jungle island in the Caribbean. They believed Jack Sparrow was a deity trapped in human form, in which they must release him by eating his body. They are secondary villains in Dead Man's Chest, and are mentioned in The Curse of the Black Pearl.

In The Curse of the Black Pearl, Jack Sparrow remarks, "and then they made me their chief", revealing that he had been to the island previously.

In Dead Man's Chest, Jack Sparrow beaches the Black Pearl on Pelegosto, knowing he was being hunted by the Kraken. The cannibals ate half the crew and with their bones, made spherical cages to imprison the rest. They once again make Jack their chief and tie him to a spit ready to roast him on a fire. He escapes the village when the cannibals chase after the crew. Jack is reunited with the crew on the beach, where they narrowly escape the cannibals. The tribe spot the prison dog on the beach and chase after him.

The cannibals make the dog their new chief, however, like Jack, he manages to escape the island.

CGI of both variants 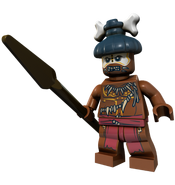 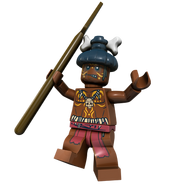 Token (Second Variant)
Add a photo to this gallery

Retrieved from "https://brickipedia.fandom.com/wiki/Cannibal?oldid=2014894"
Community content is available under CC-BY-SA unless otherwise noted.
... more about "Cannibal"
RDF feed
Accessories
Spear, Bone +
Appearances
4182 Cannibal Island
LEGO Pirates of the Caribbean: The Video Game +
ArticleRating
4 +
Image
cannibals.jpg +
Img1
Poc008.jpeg +
Img2
Poc009.jpeg +
InfoboxTemplate
Minifigure +
ShopDescription
This cannibal is just another friendly nat … This cannibal is just another friendly native of Pelegosto or Cannibal Island, until acting chief Captain Jack Sparrow tries to make a premature exit from their ceremonial feast where he’s the unfortunate “guest of honor”. Don’t be late for dinner when he’s around- especially if you’re the main course!und- especially if you’re the main course! +  and This cannibal is a native of Pelegostos Island where his cannibal tribe believes Captain Jack is their god, trapped inside of a minifigure! He loyally serves Chief Jack- until he tries to serve him for dinner! +
Theme
Pirates of the Caribbean +
Title
Cannibal +
Txt1
Cannibal 1 (1 set) +
Txt2
Cannibal 2 (1 set) +
Years
2011 +