Based on his appearance in the New 52 comics, Captain Boomerang wears a blue cap with a boomerang shaped logo on it, he has orange sideburns and wears a black jacket. He has a task force x explosive necklace which would explode if he deviated from his mission. He wears a blue shirt with a belt, that has 5 boomerangs on it (as far as we can see) He also wears grey pants and black boots. His boomerang is a metal one and he wears black gloves

Initially a boomerang promoter and salesman working for his father's toy company, George "Digger" Harkness, alias Captain Boomerang, is an enemy of The Flash. Amanda Waller has recruited him several times in the Suicide Squad alongside Bronze Tiger, Deadshot, an amnesiac Lashina, Poison Ivy and others, in exchange for a reduced jail-time.

Captain Boomerang is also one of the criminals hidden around Gotham City and can be found at Arkham Asylum. He is unlocked for purchase after his defeat and costs 100,000 studs.

In portable versions, Captain Boomerang is an unlockable character. His minikit is found in the level Assault the VTOL. He costs 200,000 studs.

Captain Boomerang appears as one of the downloadable characters in "The Squad" pack featuring members of The Suicide Squad.

Boomerang as a boss 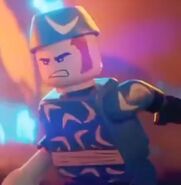