Brickbeard is the main leader of the Pirates since the discovery of the treasure map by an old veteran. As a lover of gold and his crew, He spends his time decorating his uniform, ships and soldiers with gold as it is reflected by both his appearance and his ship. He wears golden shoulder epaulets and a golden hook. His torso appears to have a lot of golden ruches and streaks. His ship is loaded with gold, as it is richly ornamented with golden plates, doorknobs, reels, flags and windows. The captain's quarters are especially well fashioned.

Brickbeard has at least one hideout containing tons of booty and has been under the attention of both the imperial soldiers and ninjas led personally by his most hated rival Governor Broadside.

Brickbeard has long been friends with King Kahuka and Islanders and personally courts them in assisting with both liberating their homeland from the Imperial occupiers and with the lust of discovering treasure and gold. 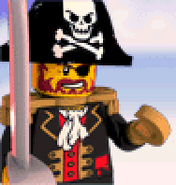 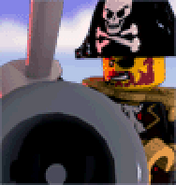 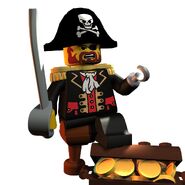 Marching along with his crew and Islanders in LEGO Battles