Captain Click is a recurring character from the LEGO Island video game series.

In the original 5731 LEGO Island, Captain Click is never confirmed to make a physical appearance and only his voice is heard, with the game's manual noting that he is camera shy. While he does not appear in the PC sequel 5774 LEGO Island 2: The Brickster's Revenge, his physical appearance is shown in the Game Boy Color version 5730 LEGO Island 2: The Brickster's Revenge, in which Captain Click's character card shows him as a white skeleton wearing a black Morion Helmet, making him appear almost identical to Skully, much like the other pirate skeletons in the game series.

In 5784 Soccer Mania, Captain Click is redesigned. Instead of the Morion Helmet, he wears a black Bicorne with a Jolly Roger, similar to the one worn by Captain Redbeard and Captain Ironhook. His skull face now features the addition of an eyepatch, marked with the Jolly Roger, giving him a unique appearance to stand out from other skeleton pirates.

Captain Click is the skeleton of a pirate. His past is unknown, although he claims he is the child of a mermaid and King Neptune. In LEGO Island, he is entombed in the cave by LEGO Island's residential area, where he prefers to be left alone to sleep and will angrily yell at anyone who clicks on his locked door. Despite his cranky attitude, he offers the player helpful tips, such as alternate control methods and taking screenshots. Inexplicably, he can also be heard by interacting with a drawer on the third floor of the Information Center.

In the Game Boy Color version of LEGO Island 2: The Brickster's Revenge, Captain Click's character card can be found in the pirate cave.

Captain Click makes his first confirmed physical appearance in Soccer Mania, in which he is the goalie of the Pirate Skeletons team aboard the Skelly Ship. Captain Redbeard makes a bet with the player: if they can beat the Pirate Skeletons team, then he will give them a secret map leading to the Volcano Hideout. Afterward, Captain Click appears as a midfielder on the Brickster's Intergalactic team.

As the Pirate Skeletons goalie, Captain Click has high speed and goalkeeping (176/272), but his shooting, passing, and tackling are far weaker than his teammates (128/272). As an Intergalactic midfielder, Captain Click has perfect stats (272/272) in all fields except goalkeeping (48/272).[1] After beating either team in the story campaign mode, Captain Click can be added to the player's custom team, marking his debut as a playable character.

The earliest known mention of Captain Click is in the July 9th, 1996 version of the backstory.[2] It mentions that Captain Click was created by the Brickster and visited LEGO Island at one point to find the Brickster's hidden cache of bricks. After finding the bricks, he returned to the Brickster's Island, to Skull Island (an early version of OGEL Island), but he left his son Mouse Click to watch over the parts he couldn't take with him. After a few years without the return of Captain Click Mouse would take an interest in LEGO Island and eventually meet the Infomaniac, who would treat him like a son. Mouse Click would later become Professor Click and create the jet-ski. An early manual draft also states both of the Clicks were distantly related to Dr. Clickitt.[3]

A pilot for a unreleased LEGO TV show was made during the development of LEGO Island featuring Captain Click,[4] with his appearance being shown as that of Captain Redbeard. In it, he sailed the Red Beard Runner and plundered bricks that weren't properly put away, along with a girl, in a real-life children's room. Afterwards, he sailed through the room's wall, which was shown as a portal into an ocean in the LEGO world. While Captain Click's role in known footage for the pilot ended there, according to LEGO Island series creator Wes Jenkins,[5] Captain Click would then take the stolen pieces to an "Island" and Ogel, before a battle began.

During the development of LEGO Island 2, he was initially mentioned in the Game Boy Color design document[6] with the name "Captain James Click" and was supposed to appear on Adventurers Island. Señor Palomar later absorbed his intended role, with Captain Click then having the same role he had in the final game. His card in the game used a LEGO Island screenshot from a fan site for reference.[7]

Captain Click is mentioned in the LEGO Island 3 Character Bible,[8] which was used for reference during the development of Island Xtreme Stunts. It describes him as a ghost pirate no one has ever seen, unlike the Game Boy Color port of LEGO Island 2 and Soccer Mania which showed a pirate skeleton as outright being him. 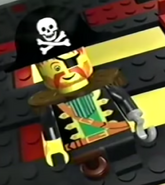