Captain Indigo, originally named Bill, is one of the first two Minifigures to have names and be established as proper characters, the other being his partner Mary.

Bill and Mary were first featured in 6000 LEGOLAND Idea Book, which showed their adventures through Town, Castle, and Space settings. While the book did not come with their actual complete minifigures, it did come with the unique stickers for their torsos, which could be used to create proper minifigures of them.

The Spring 1983 issue of Bricks 'n' Pieces magazine saw the beginning of the Captain Indigo comic series, with Bill appearing under the name Captain Indigo, and Mary under the name Lieutenant Polka-Dot. The comics continued through each magazine issue until the Spring 1989 issue, where the third and final story arc was concluded. The art style and character design of the Captain Indigo comics also changed throughout the six year run, with Indigo's pants occasionally changing colour to white, light grey and eventually blue, and both Indigo and Mary's skin being flesh toned instead of yellow when the comics shifted from black and white line art to full colour.

In the first story, Indigo and Polka-Dot are sent out to investigate a UFO, and are sent back in time to the 'Kingdom of Avalon' to retrieve a magical jewel called the 'Zarconian Jewel' by Emperor Bartok (leader of the Zark planet) controlling it. The jewel has fallen into the hands of the Wizard of Avalon and the Black Knight, and Indigo and Polka team up with Sir Richard and the Crusaders to defeat them and use the jewel to return to their original time period.

In the second story, the duo are sent to a LEGOLAND town, only to be arrested by android police officers. They find that the androids have overtaken the town and imprisoned the real police officers, and after a car chase with the androids, find a robotic city where the androids were created. Inside one of the buildings they encounter Tobor Rekam, a robotic knight, who is the creator of the police robots. Tobor reveals he has created a robotic version of Indigo, which Indigo fights and defeats. Polka-Dot then shuts down the assembly line, and Indigo captures Tobor.

In the third and final story, Indigo and Polka-Dot are accidentally sent back in time by their robot dog T42, where they meet Robin Hood. Robin Hood tells the two adventurers that the Sheriff of Nottingham had been stealing any loot he can get his hands on, so Indigo and Polka-Dot team up with Robin Hood to set a trap for the Sheriff. Once the Sheriff sees Indigo, he reveals himself to be Garth Raider, a space villain Indigo once shot down in a battle with the Stardefender 200. Garth is about to kill Indigo with a sword, when Robin Hood knocks him out with a heavy stick. The Sheriff is caught, and the story ends.

Bill and Mary also make an appearance in the mobile game LEGO Tower, along with a special rooftop based on the 6000 LEGOLAND Idea Book. Players in the game's official Discord server noticed all the pieces necessary to make the minifigures as citizens were already in the game's default character creation pieces, except for their torsos, and suggested that they be added. The developers liked the idea, and included the new content in update 1.4 on September 18, 2019. Their torso pieces can be received as random rewards, while the rooftop can be acquired by entering the code "6000". 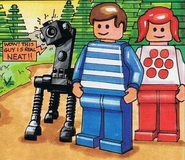 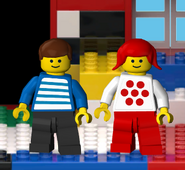 Built as citizens in LEGO Tower 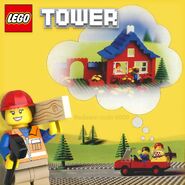