Captain Panaka is a minifigure released in the Star Wars Episode I: The Phantom Menace theme. To date, he has appeared in four video games, yet only one set.

Captain Panaka is included with a hat which more accurately resembles its appearance in the films than the hat that appeared in his video game incarnation did. His face is majorly improved compared to the video game variant. The Torso has printing and is a brownish-red colour. The arms are bluish. The Legs are also blue as well.

Panaka was the captain of the Naboo Security Officers at the time of the invasion of Naboo. He was also the head protecter of Queen Amidala during her reign. His nephew was Captain Typho, Padme's security officer during Episode II. 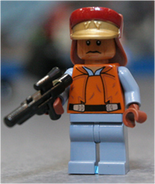 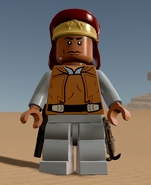