Captain Phasma, along with General Hux and Kylo Ren, is part of the ruling triumvirate of the First Order underneath Supreme Leader Snoke. Phasma led the Stormtroopers in attacking Lor San Tekka's village on Jakku, and ordered the slaughter of its inhabitants afterwards; she took note of FN-2187's failure to fire and ordered him to report to processing. The two later crossed paths again after he helped Poe Dameron escape, with Finn, Han Solo, and Chewbacca capturing her on Starkiller Base. The trio forced her to lower the base's shields and then dumped her in a trash chute, though she was rescued before Starkiller Base's destruction. She later helps the First Order capture Finn, Rose Tico, and BB-8 onboard the Mega-class Star Dreadnought Supremacy. When Vice Admiral Holdo damages the Mega-Destroyer, she duels Finn, who defeats her and she falls into the abyss of the ship. 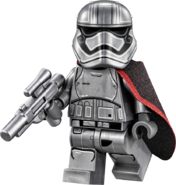 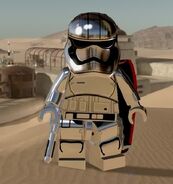